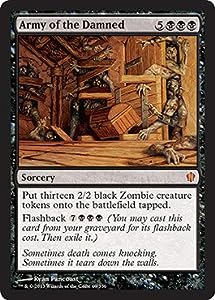 Magic: the Celebration is a collectible card video game developed by Richard Garfield. In Magic, you play the part of a planeswalker which battles various other planeswalkers for magnificence, understanding, and conquest. Your deck of cards stands for all the tools in your toolbox. It consists of the spells you understand and the animals you could summon to combat for you.Card Name

: Military of the Damned

Card Text: Place thirteen 2/2 black Zombie animal tokens onto the battleground tapped.Flashback 7BBB (You may cast this card from your graveyard for its flashback cost. Then exile it.).

A single individual card from the Magic: the Gathering (MTG) trading and collectible card game (TCG/CCG). This is of Mythic Rare rarity. From the Commander 2013 set.