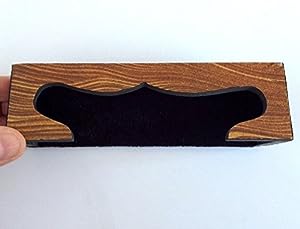 This is a mechanical stand, valuable for vanishing four coins in a very persuading way. The stand is used to apparently present the coins, as well as its innocent as well as smart design makes it appear impossible for the coins to be hidden in this. And yet, that is specifically what occurs - the coins slide right into the stand - hidden, in the act of selecting them up.

The Coin Vanishing Stand can be used in any impact where coins are to be disappeared, as well as later on reproduced in one more place, along with any various other coin creating apparatus. As you produce the coins individually, you put them on the stand to present. At the end, swiftly get the four coins individually, as well as throw them right into the air - they all disappear. Coins from no place, - back to no place!!!

Made in laminated wood, as well as provided with many concepts for its usage.

COINS NOT INCLUDED supplied with many ideas for its use