Pasteboard Pieces: A Collection of Magic Tricks & Moves with Cards 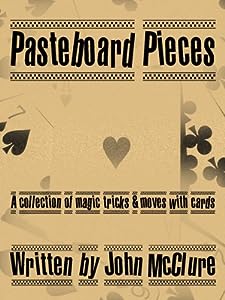 Pasteboard Pieces: A Collection of Magic Tricks & Moves with Cards

As of 2021-09-05 09:05:56 UTC (more info)
Not Available - stock arriving soon
Product prices and availability are accurate as of 2021-09-05 09:05:56 UTC and are subject to change. Any price and availability information displayed on http://www.amazon.com/ at the time of purchase will apply to the purchase of this product.
Product Information (more info)
0 0

A book of magic techniques and relocations with cards. Ideal for card-handlers of sensible ability. The techniques vary from betting demonstrations (reducing the aces from a mixed deck, centre-dealing), to story-based card techniques, and a few transfer to add to your toolbox.


The techniques are:
< br/ > Virtually Scarne's Aces: A deck is unwrapped and the seal damaged by a spectator. The cards could be checked out by the viewer. The viewer shuffles and reduces the deck as much as he desires, before handing the cards back to the performer. The performer after that dead-cuts the aces as he tells the popular tale of John Scarne reducing aces as needed from a mixed deck.

Fake Centre-Deal -Technique 1:< br/ > A really convincing centre-deal demonstration entailing a spectator, that does not involve a centre-deal.

Countdown: The cards count down from 3 to one, before 'launching'.

Battling Jacks: 2 cards are shed in the deck, and are later discovered to have actually changed colour.

Valentine's Day: A suitable card method for fans. By fate alone, the fans' cards come together as if they were always indicate to be.

Instantaneous Mind Reading (aka The Happiness of Glimpsing):
< br/ > Utilizing a mixed deck and without any hesitation you call the viewer's picked card. This could be repeated immediately numerous times.