The Amazing and Funny Knife-Through-Coat Magic Trick: for Magicians and Illusionists 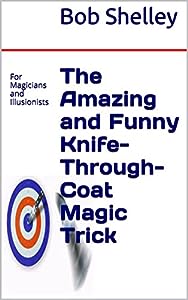 The Amazing and Funny Knife-Through-Coat Magic Trick: for Magicians and Illusionists

As of 2021-01-17 21:26:21 UTC (more info)
Not Available - stock arriving soon
Product prices and availability are accurate as of 2021-01-17 21:26:21 UTC and are subject to change. Any price and availability information displayed on http://www.amazon.com/ at the time of purchase will apply to the purchase of this product.
Product Information (more info)
0 0

This is an improvement over store-bought versions and will last practically forever. (I've been using the same target for more than 5000 shows!) Take any spectator’s coat and proceed to shove a kitchen knife (or virtually any kind of knife) right through it--while the volunteer is holding his own coat! Remove the knife and the coat is good as new! This is a highlight in every magic show I perform and it always knocks their socks off! Easy to make for a few of dollars.You'll love it!


"I have known and worked with Bob Shelley over many years. He is truly one of the very funniest and best comic entertainers out there. His talents are many: Hypnotist, Emcee, Magician, Comedian, Motivational Speaker. He has an incredible ability to get his audiences to laugh, be amazed and be inspired. In addition, he is a true professional with the highest of integrity. Any client that books him --corporate, academic, private or otherwise will not be disappointed." Jonathan Levey, Employment Counsellor, Access45+ Program at Federation CJA

Bob Shelley is the author of dozens of books chock full of comedy and magic! You’ll find all the titles among Amazon.com’s Kindle books. The chapters that once were published as part of Bob’s Book, All My Best, are now available individually, trick, by trick, comedy routine by comedy routine in an effort to make all of the fabulous secrets and hilarious material easier to find. Visit Bob’s website, bobshelley.com to discover this career magician and the many popular performers with which he has performed on stage—celebrities you will instantly recognize, perhaps most notably Bob Hope.
Bob plays to capacity crowds wherever he appears—including Rutland Vermont’s Paramount Theater where he has performed for seven consecutive years, performing before sell-out crowds year in and year-out. He sells out shows in and around Montreal whenever and wherever he appears. In the words of Jerry Aldrich and Jay Sprout, Coordinators for First Night® St. Johnsbury, VT: "Bob Shelley is an incredibly versatile performer—he entertains with original and creative comedy and magic -- a brilliant show that takes family magic shows to a whole new level of entertainment!”

“Bob Shelley’s magic and hypnosis shows were so popular, we’ve had to open the balcony of the Paramount Theater every year he performs! He is the only performer to attract crowds of that size in the 15-year history of our event!” Martin Bones, Exec. Director, First Night ® Rutland, VT

The amazing and funny magic tricks, illusions, visual gags, comedy routines and laugh you find in my collection are professional-grade, top-quality, suitable for sidewalk, parlor, stage or concert hall. Each is ideal entertainment, proven, polished and perfected for professional magicians, comic magicians, illusionists, magic clowns, children’s entertainers, emcees and variety performers.
All props are dead-simple and cheap to make, but play BIG with the emphasis on entertainment and each will have a powerful effect on the audience!

Take any spectator’s coat and proceed to shove a kitchen knife right through it. Remove the knife and the coat is good as new! The effect is breathtaking! (I actually had a woman nearly faint when I thrust the knife through her brand new red leather coat. But she was all hugs and kisses when I showed her and the audience that the coat was good as new! I love this illusion!